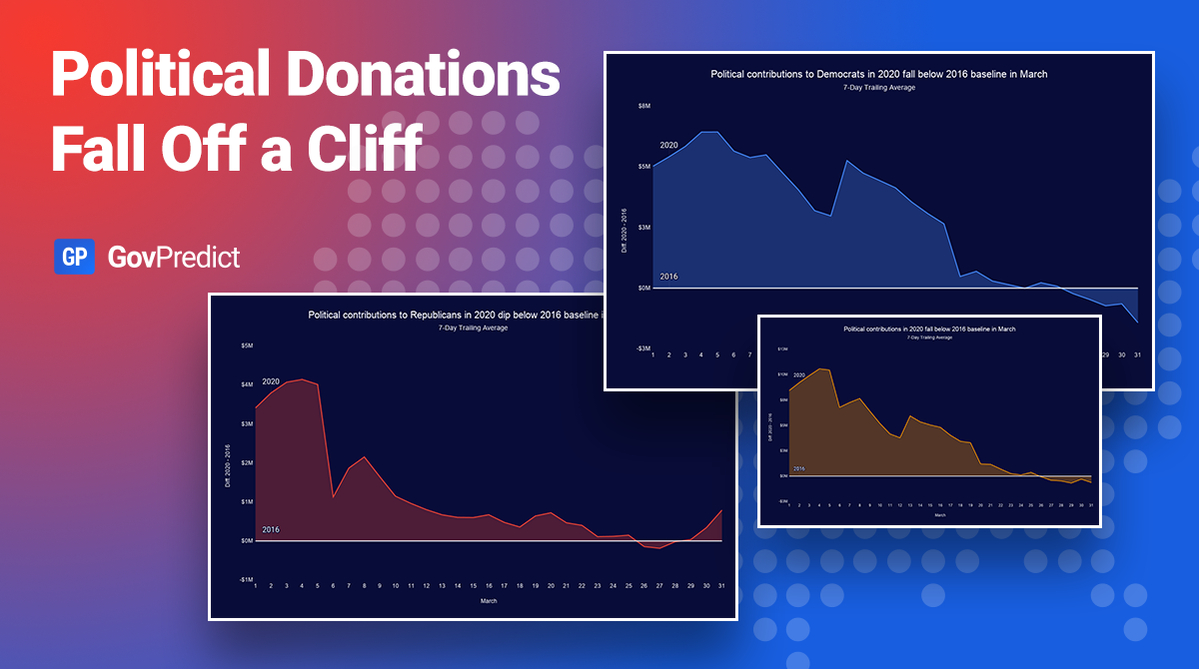 In mid-March 2020, political donations to candidates fell off a cliff. Campaigns had been collecting double what they did in 2016. As cities went into shelter-in-place, and as economic uncertainty grew, donations fell all the way back to where they were four years ago, sometimes even lower.

For the rest of this article, we will talk about the differences in contributions to Democratic and Republican campaigns during the 2016 and 2020 elections. We’ll be looking exclusively at March on a day-by-day basis. In order to smooth out the natural peaks and valleys in data like this, we’re using a 7-day running average.

At the start of the month, donations were still strongly above 2016 levels. It was normal for daily donations to be $6 Million, $8 Million, even $10 Million more than four years ago. The atmosphere in the country was cautious, but most people had not yet been told to work from home. Most children were still attending face-to-face classes.

Then, starting around the 15th, state after state sent children home and workers to their home offices. The global pandemic suddenly became real, and Americans started to wrap their minds around the potential economic uncertainty they were facing.

That’s when the bottom dropped out. Daily donations start falling to only $1 Million to $2 Million over 2016. Not great, but still an improvement over the last presidential election. Then they tip even lower. During the last four days of March 2020, donations were as much as a full $1 Million lower than 2016.

Donations at the end of March 2020 should have been millions higher than 2016. Instead, they were millions lower.

From all appearances, Democrats had the momentum going into March. They were consistently scoring collections twice as high as Republicans and (more importantly) twice as high as they had in 2016. If elections are helped by political donations, then Democrats were getting much more help than the GOP.

Then the economic crisis hit, and it hit them harder than it did Republican campaigns. We see deeper dives in the differences between 2016 and 2020 than we do for Republicans. Overall, the end of March looks much worse for Democrats.

Republicans seem to have done a better job keeping their donations flowing than their Democratic counterparts. Though their receipts got down to 2016 levels, they only barely went below it. If elections are helped by consistent support, then Republicans appear to have that.

However, they are still behind Democrats in terms of total amount raised. When the FEC reports on the details of Q2 collections, the real question will be, “Were Republican campaigns able to keep their baseline levels?”

Want to Turn it Around for Your Committee?

All of these data came from analysis of political donations, which are publicly disclosed to the FEC and then made available. GovPredict’s Moneyball takes those raw numbers and combines them into a super database along with state and local donations as well as IRS disclosures from 527 organizations.

This one-of-a-kind dataset means PACs and campaigns can find the true giving capacity of their donors and even discover party loyalists they didn’t know existed.